We Are The Leaf Men 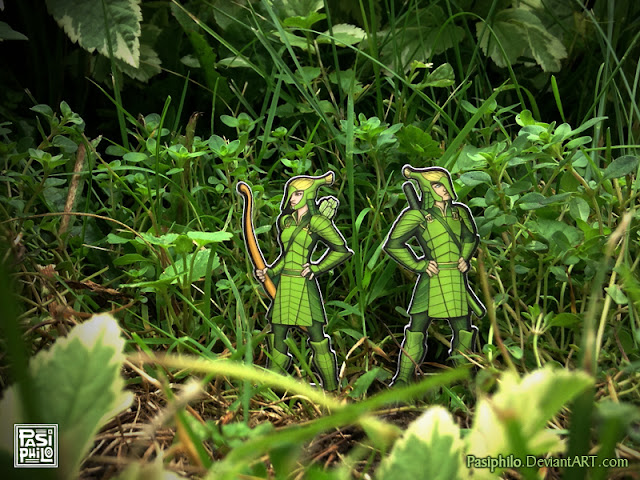 We Are The Leaf Men - Created By Pasiphilo !

After watching Epic I decided to create a couple of paper minis inspired by the faery-sized Leaf Men, whose armour design I loved. Standing exactly two inches tall, this female archer and male samurai can be considered 1:1 scale.As for the film itself, I enjoyed it overall. I wish the story had been more sophisticated, but the character designs were awesome and the animation was quite immersive. Plus, anything that combines armoured warriors with a nature theme is going get my attention. Artwork (front and back) drawn in Photoshop with my graphics tablet, printed on photo paper and cut out.*Or, used as 28mm OGL-based scale miniatures, they'd count as "Large" creatures. Forest giants, perhaps? 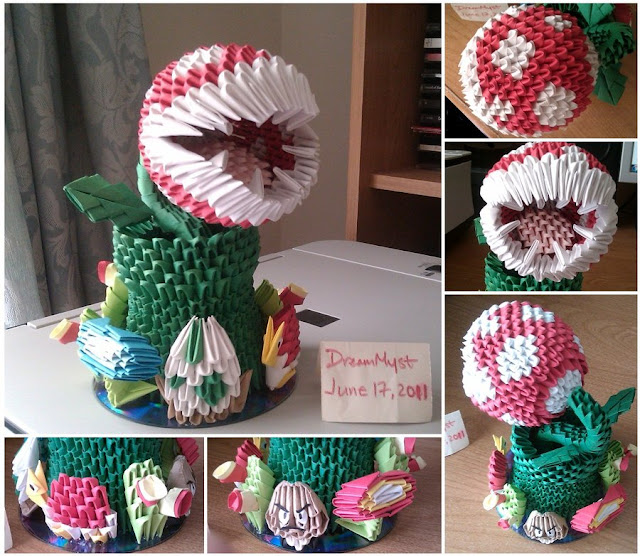 Note: I apologize for the picture quality. I was using my phone since my camera is still missing. It looks way better in person. I may post an improved picture of it later. It's a piranha plant from the Mario series. I was using the daruma leftovers for a red mushroom when I noticed that the pieces were much larger and puffier than that for the 1-up. Staring at it some more made me think of a piranha plant so I set it aside and made what you see above at a later point. It looks adorably hideous.I added random Mario related items around the bottom. They were made by thinking of the modules as pixels. There are awesome projects out there that utilize this technique on a grand scale so I'm happy I was able to incorporate it in a small way. The ones I made include a fire flower, ice flower, koopa troopa, goomba, Yoshi egg, and bushes with apples on them. It's all out of proportion and a bit cluttered, but I think it adds a needed touch of color. I would have made other things, but a CD only has so much surface space and I didn't wanna obscure the pipe further.It's about 1100+ pieces or so. I don't know the exact count, though. I have to say, I am amazed that the head is staying together so well. The pipe on the other hand.... Must buy a different brand of green paper when I get the chance. Slick paper isn't fun, especially when you have to redo rows multiple times.Materials:- Colored Paper (Most are modules except the faces for the little characters.)- Glue (I would use magic, but I am human after all. It was used for the adornments and putting the parts of the piranha plant together.)- Broken CD (Might as well use it for something.)Time Estimated: Hmm...5 hours more or less (not including module making time)? I should prolly get rid of this time-estimated thing since I don't usually time myself. Plus it's hard to estimate when I make things while multitasking, so who knows? 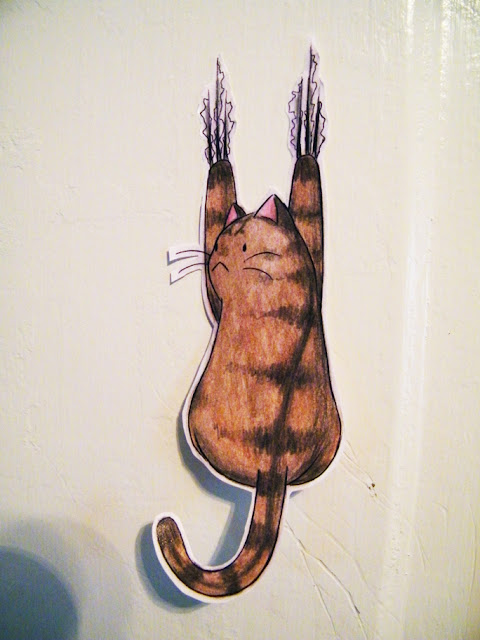 One of the paperchildren I'm making for a donations table for the Animation club at my college. Tabby cat scratchin' up mah door.

Posted by NoCares at 3:00 AM No comments: 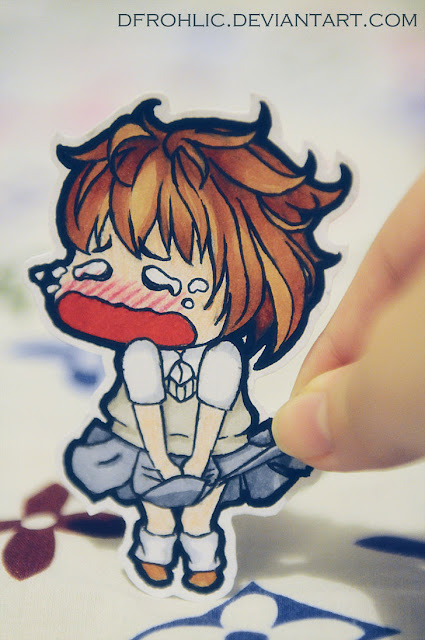 my friend, Adi, asked me to make him a paper child of Misaka Mikoto~ lol

Posted by NoCares at 2:58 AM No comments: 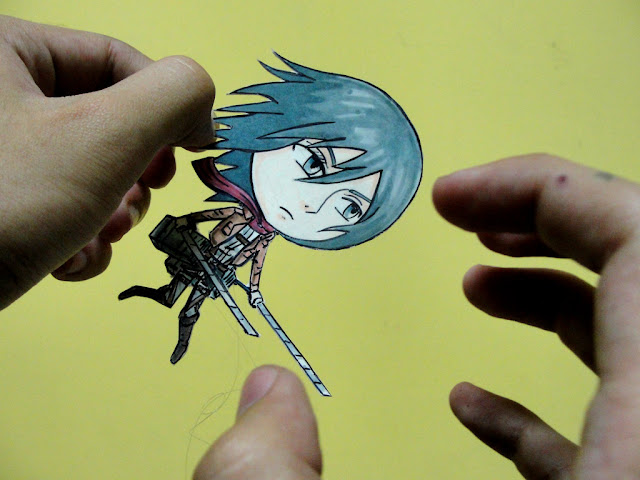 A paperchild of Mikasa, I'll try to hang it with some nylon like the 3d maneuver gear. I love Attack on Titan (especially the manga). Hope you like it!

Posted by NoCares at 2:56 AM No comments: 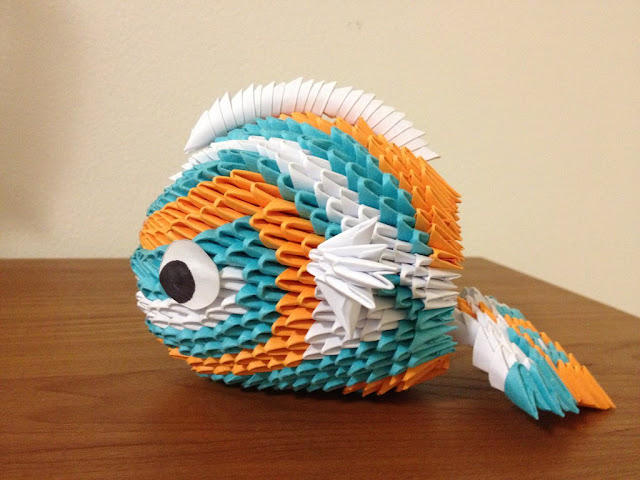 Posted by NoCares at 2:54 AM No comments: 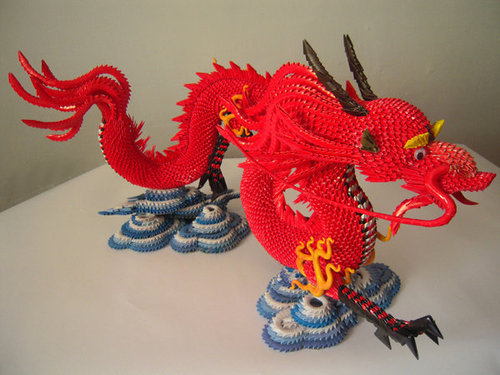 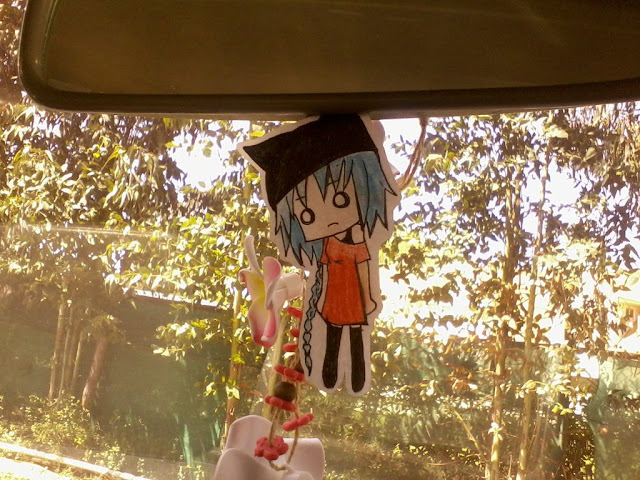 Posted by NoCares at 3:33 AM No comments: 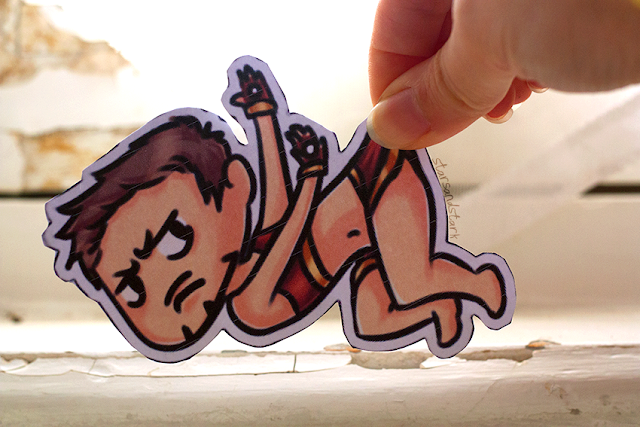 Posted by NoCares at 3:32 AM No comments: 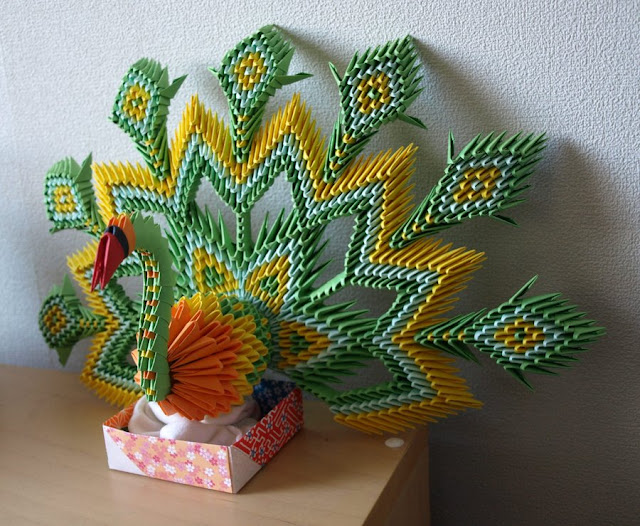 Started: April 20, 2012Finished: April 22, 2012Pieces: 1299Time spent: about 20 hours + several hours for the glue to dry...I did not design this origami, nor can I take all the credit for it. I got the instructions from this website: [link] I did a few changes to the original design, mainly on the neck. I wasn't that fond of the thick neck so I made it thinner. This is the second most frustrating 3D origami creation I've made. It took forever, and thanks to the fact I don't have a hot glue gun, it took forever to actually glue the tail together with the body. And yes, the use of glue is actually required with this model. I was overall worried from the start that this wouldn't come together. The dark green paper I used as the base is really really REALLY thin, half thinner than the rest of the papers, and I was sure the whole model would collapse as soon as I got it together.I'm still waiting for the glue to fully dry before I can finish this piece. It still needs a "nest" or a pedestal for it to stand. As seen in the picture, the body is higher than the lowest parts of the tail. But I'll get to that later. Right now I just wanted a picture in case the whole thing fell apart after all. The tail is extremely fragile because of the thin paper...3D origami is basically folding small pieces of paper into triangles that fit together to form this rather strong structure. If you're interested, I suggest you find some beginners tutorials on Youtube. Trust me, there's a lot of them!

Posted by NoCares at 3:31 AM No comments: 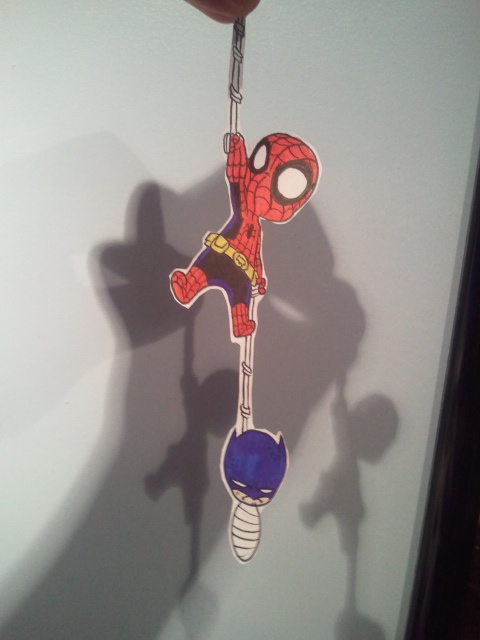 Experimenting with other forms of art. So I figured "screw it".So enjoy our friendly little neighborhood having a ball with the little dark knight.

Posted by NoCares at 3:29 AM No comments: 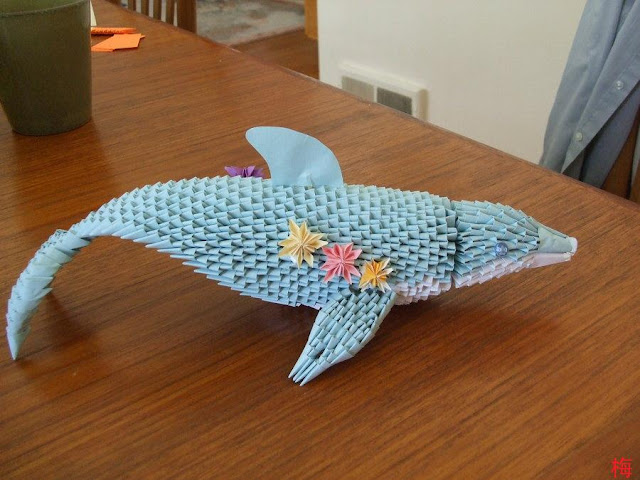 Posted by NoCares at 3:27 AM No comments: 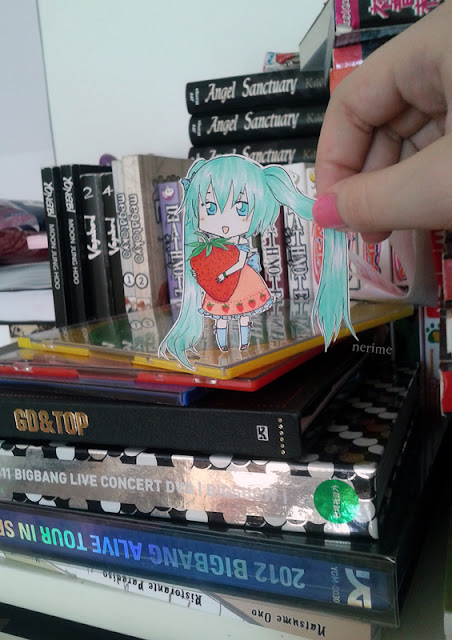 this is a little cutie i made for my mom for mother's day ;3; she was superhappy and appreciated the details

Posted by NoCares at 3:25 AM No comments: 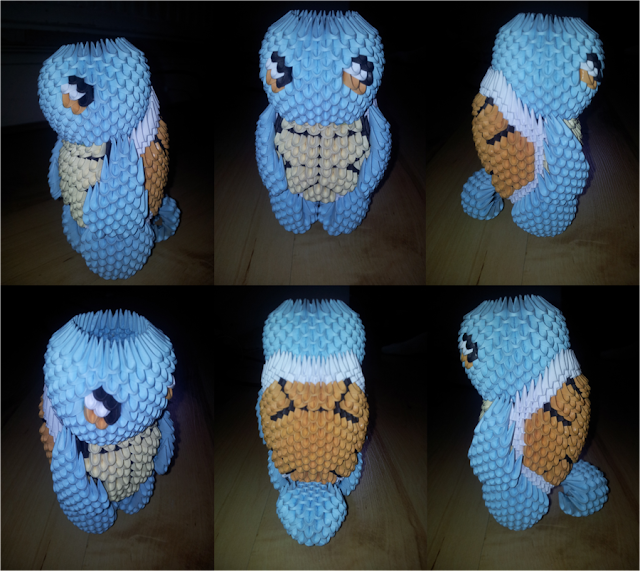 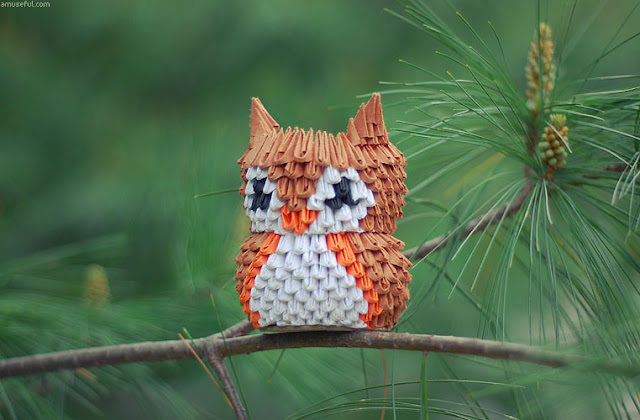 Irene's 3D origami owl pencil holder. Soon to be available on amuseful.com. More from the same shoot on FB: [link] 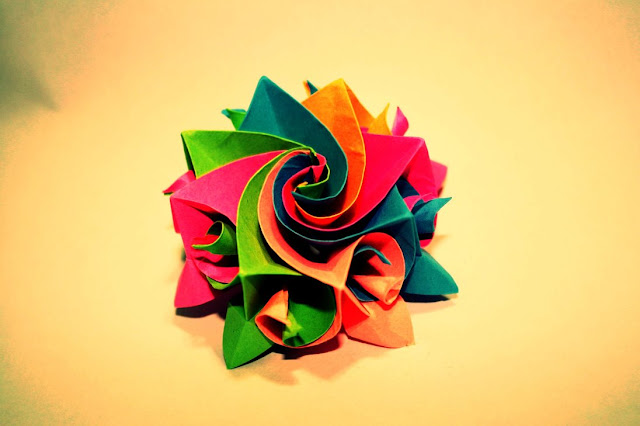 Posted by NoCares at 3:03 AM No comments: 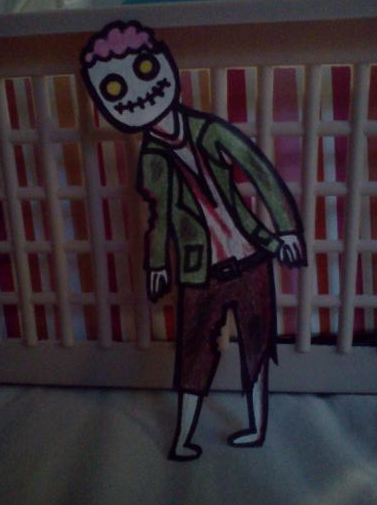 He is part of a larger project that I am submitting for a contest! More zombies to come!

Posted by NoCares at 5:57 AM No comments: 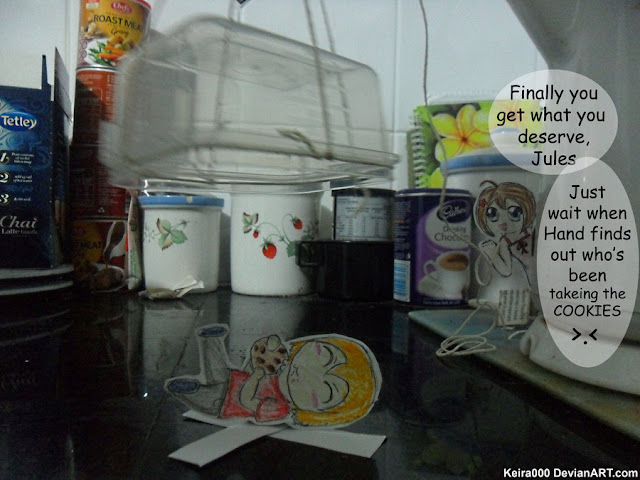 Miri is finally getting her revenge for getting in touble withHand, which was totally Jules' fault.She is always getting picked on so this is her chance.Hand is very very VERY protective of the COOKIES

and now that Miri had proof that Jules is behind it.She has set up a trap that is dangling above Jules head.The cookie must be good cause he hasn't noticed it yet.Jules is about to get his Just Desserts_________I had this in mind and got it done surprisingly quicklythe plastic container kept twisting and moving that it was inpossible not get the motion blur, the paperchildren must have been eating my cookies cause the cookie tinwas EMPTY!!!!!

Posted by NoCares at 5:54 AM No comments: 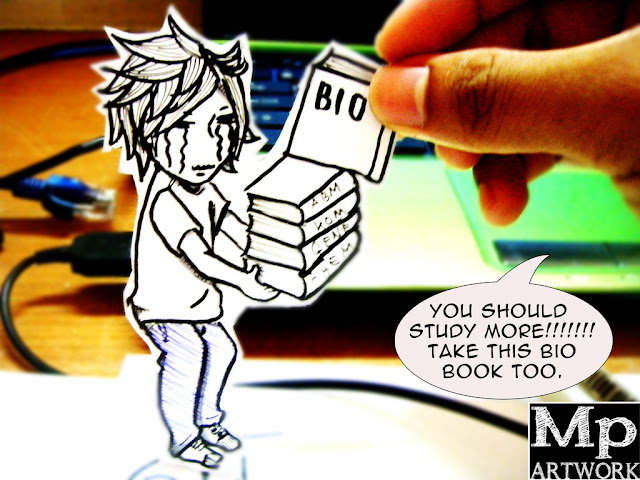 my exam is near....but like most of the student...games comes first right??need some "push" maybe.....

Posted by NoCares at 5:52 AM No comments: 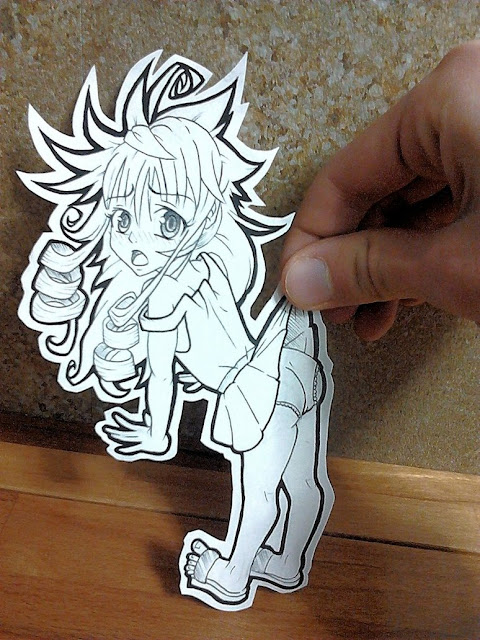 Posted by NoCares at 5:51 AM No comments:

Help Us Promote This Art